Many people love the idea of having soft panniers but still having some form to them… Semi-hard panniers.

Naz always had cut down jerry cans in hers when she was travelling. They had rope handles 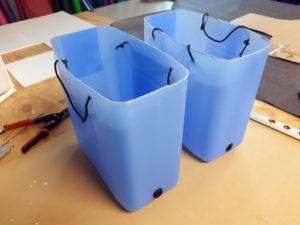 and one side was the kitchen which she could simply lift out at camp. This idea works well for our Big Fella Panniers and Postie (or large) sized panniers. You can get 20L plastic jerry cans cheaply then you simply cut the tops off, drill or burn holes for handles and attach rope handles.

For smaller panniers such as our standard size motorcycle panniers or small saddlebags another idea is to construct boxes from coreflute sheets. The sides can either be taped or you can use the angle joiners that are used for sheeting in bathrooms (see the picture in the gallery).

Zak Thomas
Great service and products, the best part is it's all Australian made! Will definitely be recommending Naz to anyone needing motorbike canvas products

Honky Brookster
I have purchased a few products from Naz Bags....The Customer Service, Quality of the Goods are second to none !.....Furthermore, AUSSIE MADE with craftsmanship and Pride ! .....HIGHLY RECOMMEND THIS AUSSIE BUSINESS and their Products....Cheers Mark

Kylie B
Fantastic communication, and Narelle goes above and beyond. Good quality products. Have bought twice, and will do again

Morry Cantarella
Just want to say a Big Thanks to Naz for the Tool roll i purchased a couple of years ago now ..its a little Beauty iy holds everything i need it sits in the small bag i have on the back of my trailbike getting bounced around every time we go out and it still look and works like new ..

Chris Johns
Fantastic quality gear. Custom alterations are no problem and turnaround time is fast. I have bought many items from Naz and will continue to do so!

James Lamb
We recently ordered two naz bags camp cutlery rolls, made out canvas. We received them and are very impressed with the construction quality and overall material selection. So very happy with the purchase. Kudos to the team for an exceptional product.

Dean Lawson
Good quality Australian made products. I am very happy with the product. I bought some panniers for my bike, top bag and some extra things. I've been through alot of dirt back roads and tropical rain and I've found them outstanding. I highly recommend the product to any adventure rider out there.

Mick Harrison
Finally got to use my naz bags postie bags on my Husqvarna 701lr today, been waiting for my racks to turn up! The bags are great, hold heaps of stuff. I did 260k's of mountain trails today with some deep creek crossings and a few showers & everything stayed nice & dry & the bags didn't budge. Thanks Naz, great product😀
Google rating score: 5 of 5,
based on 15 reviews.