They are made as a throw over style pannier that are designed to be able to fit many motorcycles but were designed with the Honda ct110 in mind. The straps between the two bags are adjustable wide hook and loop tape sewn to seatbelt webbing. The bag seals via a hook and loop tape opening which then rolls or folds down before a large flap encloses the top assisting with water resistance and improving the style of the panniers.

The flap is adjustable by your choice of either side release buckles or steel d-rings at the front.

At the rear base, centre and top back of each bag are webbing loops that can be used in a variety of ways to assist in attaching the panniers to the motorcycle.

The roll down has extruded plastic strips for ease of rolling and there is a panel in a pocket at the back for stiffening.

Our panniers have molle webbing strips on the front and back of the panniers that allows a variety of molle compatible pouches and accessories (not included) to be attached as needed. You can see our range of molle pouches here.

The dimensions of each bag are approximately 320mm long, 350mm (plus 200mm rolldown) high and 180mm wide. The adjustable straps between bags can be used up to 500mm wide.

The postie panniers (or saddlebags) are available in a range of rip stop canvas colours as below.

Our Flat Straps work very well with the panniers for fastening to your motorcycle in a variety of ways.

We have a two to three week turn around on these in particular as we do not keep all of the colours in stock.

There are no reviews yet.

Be the first to review “Postie Panniers” Cancel reply 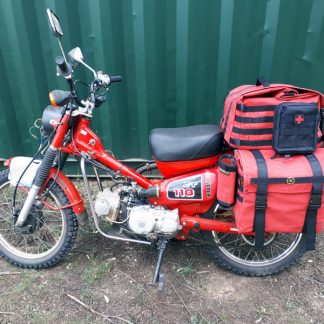